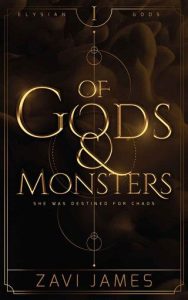 “I don’t think getting to know me that intimately is part of the job description,” I whispered in her ear, amused by the salacious thoughts. Who’d have guessed the stiff in the lab coat would have such a dirty mind? “Let me make this clear. I would never touch a filthy mortal like you in such a way.”

Dr Quentin Scott doesn’t believe in the Gods. Forsaken at every turn of her life, she refuses to kneel before them and beg for scraps. But when she is recruited the E.L.I project, Quen is forced to come face to face with the Gods she detests.

Grayson, God of Chaos, never wanted to be part of the project. He would happily spend his days in Upper Elysia, watching the madness he created unfold amongst the mortals, but he’s outnumbered. When he’s paired with a disrespectful nonbeliever, Gray’s temper leads his every action. And then he senses the chaos that lies beneath the pretty façade, and he vows to break her.
As Grayson and Quentin lock horns over the smallest things, something sparks between them. But a spark can become a raging inferno in the blink of an eye and the damage done may be irreparable. When secrets start to emerge that could shift the balance of powers in Elysia, decisions must be made and there’s no such thing as an easy choice.

The Gods have come to play but it’s a dangerous game. Who can you trust?

*This book contains sexually explicit scenes, mature language, discussion of deceased parents and a train accident and OM/OW drama. Not intended for readers below 18. Reader discretion is advised.*