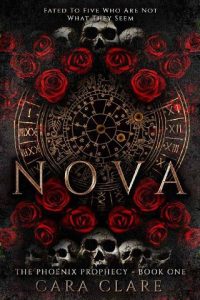 My ex joined the Anti Magick Alliance. He branded me with their crest. Turns out, he’s played with the wrong witch.
I grew up believing I was human. My entire town hated supers, but I’ve always been drawn to them. Especially mages.
On the night my anti-magick ex finally took his cruelty too far and tried to kill me, my powers awakened. I burned his apartment to the ground and left him in the flames.
But now I’m on the run, hiding out in a town called Phoenix Falls. A town full of magick. A town where four super-hot mages believe I’m the key to a prophecy that will stop the underworld from rising.
There’s Kole, the one they call The Viking. A powerful earth mage who’s addicted to human blood, he scares and excites me. I know being near him is dangerous, but I like it. And I know he does too.
Tanner is the gentle one. An empath with a dark past. He knows what I need before I need it, and he has some serious history with Kole.
Mack is the daddy of the group. The Professor. Super hot. Like a guy from a coffee commercial. Silver hair, goatee, deep brown eyes. Oh, and the ability to shift into a friggin’ polar bear whenever he feels like it!
Finally, there’s Luther. The fire mage cop who hates humans. He despises me, but when two hot flames combine there’s bound to be fireworks.
If they’re right about me, I’m supposed to save the world. But first, I need to save myself from the wrath of the Anti Magick Alliance.
If only I had four powerful mage boyfriends to help me…