Home
Historical Romance
Nothing But a Rake by Abigail Bridges (ePUB) 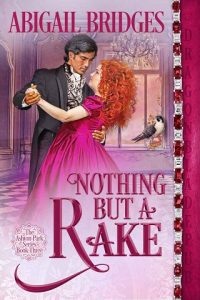 He believes love is an unattainable goal. She is facing a marriage without it. But when their paths cross in a mud-drenched alley, both discover something neither thought possible—hope.

Four years ago, Lord Michael Ashton stood at a crossroads in Gretna Green, abandoned, penniless, and determined neither would happen again. The third son of the Duke of Kennet, Michael left his family for a life in the darkest streets of London. Now his father has delivered an ultimatum, and Michael faces a steep climb out of the gutter.
Lady Clara Durham struggles to find her place in Society as well. She is too round and too smart to please most aristocratic gentlemen, and far too quick with her tongue. But with her father’s health declining, Clara agrees to marry the Duke of Wykeham, a prickly man with ulterior motives.
Everything shifts, however, when Clara’s kitten disappears down an alley. Clara darts after her, tripping headlong into a mudpuddle behind the Kennet stables. When Michael helps her up, he becomes fascinated by this woman who loves horses, talks about hunting with a falcon, and is more interested in finding her cat than cleaning off the mud.
The sparks that fly between them leave both determined to help each other out. But their struggle to make new places for themselves in London’s Society explodes into a conflict between three powerful families that results in a horse race with their future at stake and a duel that could destroy them both.