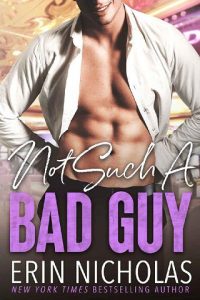 A fling, a funeral, and a little falling in love… just another weekend in Bad, Louisiana

Physical therapist Christopher Gilmore is back in Bad, Louisiana, for the reading of the will of his friend and mentor, Patrick Faucheaux. Christopher expects a small memento from the man he considered a father figure. He gets far more—including the task of sorting through Patrick’s belongings with the help of his beautiful, sassy daughter, and fellow PT, Regan.
Who just happens to be the woman Christopher had a hot, spontaneous encounter with the night before.
Awkward.
And amazing.

Like all the residents of Bad, Regan grew up adoring Patrick, which made learning he was her father—just days before his death—feel like the ultimate betrayal. She wants nothing from the man who cheated her out of having a father, and even less from his adoring ex-student. Too bad she can’t get Christopher’s kisses out of her head.

Forced to work in close quarters, Regan and Christopher succumb to their scorching chemistry as they sift through Patrick’s life, learning things about him neither knew—both good and bad. As Regan’s bitterness toward her father fades, Christopher’s admiration for the man also dims. Discovering his role model was a flawed human has Christopher questioning his judgment in other areas…like his feelings for the man’s daughter.

Is his attraction to Regan the real deal? Or is this all just a really bad idea?