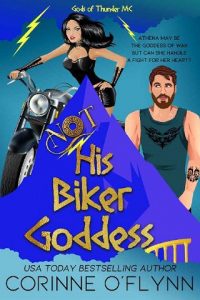 She may be the goddess of war, but can she handle a fight for her heart?

Athena, Goddess of War, has never been in love, and that’s just fine with her. The logic is clear: love equals drama. She’s perfectly content with her life in the Gods of Thunder Motorcycle Club, just ask her… but then what is this itch she’s feeling? Why can’t she sleep? What is making her so stir-crazy? Athena revs up her Indian Chief and rolls out of town, hoping to calm the fires within.

But driving a vintage bike isn’t all it’s cracked up to be. When her Chief breaks down in the smallest of small towns, Athena discovers there are some things even a goddess can’t find. Vintage part? Get in line. At least the mechanic knows what he’s doing. And that’s the trouble, because now she’s calm and cool. Now she’s sleeping like the dead, if the dead slept with gigantic smiles on their faces.

Malcolm Sova is back after too many tours in Afghanistan. He’s hung up his special forces patch and returned to his first love: anything on two wheels. Nothing makes more sense than fixing and riding motorcycles. But when the raven-haired goddess rolls into town on the sweetest Chief he’s ever seen, he’s faced with a challenge that feels more like a battlefield from his past.