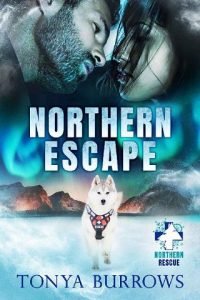 Brielle Ives prefers dogs to people, and who could blame her? Her sled dogs are loyal to a fault, trust her implicitly, and couldn’t care less about the scars that mar her face. The only human who’s never disappointed her is her mentor, Dr. William Hunter. When his plane goes missing in the remote Alaskan wilderness, Bree will do anything to find him . . . even if it means turning to a frustrating, irresponsible, and too-sexy-for-his-own-good California boy for help.

When Ellis Hunter enlisted in the Army at eighteen, he put Alaska—and his womanizing drunk of a father—in his rearview mirror. He promised himself he’d never return, but even he can’t resist Bree’s panicked plea for help. If she’s hell-bent on trekking into the bush to find his father, then he’s determined to go with her. But Ellis isn’t the only one shadowing Bree’s rescue attempt…

When the search for answers leaves Ellis and Bree trapped together in the wilds of Alaska, they’ll have to put aside their differences—and an attraction hot enough to melt glaciers—to survive the elements. Because someone dangerous lurks in that icy wilderness—a killer desperate to keep Dr. William Hunter’s secrets buried deep in the snow.