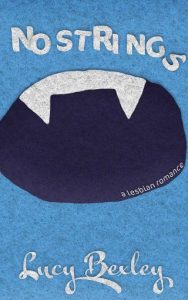 Fun is the one thing Elsie Webb takes seriously. Though she’d be having a lot more of it if Haelstrom Media paid her enough to actually get out of debt. She’s determined to hold out on contract negotiations for her kids’ television show Fangley Heights until she gets what she deserves. There’s only one problem, the head of the network just died and left her future more uncertain than ever.
Forty-eight hours and one funeral–that’s all Jones Haelstrom has to get through before she can return to her life in LA that’s as ordered and sparse as an IKEA showroom. When she steps in as CEO of her father’s media company, Elsie Webb is her first problem to deal with. Elsie ends up challenging Jones in ways she never could have predicted, starting with an attraction neither can avoid.
As their attraction teeters on the edge of something more both agree to keep it casual. A no-strings agreement and disclosure to HR should be enough to keep things between Jones and Elsie from getting tangled, right?