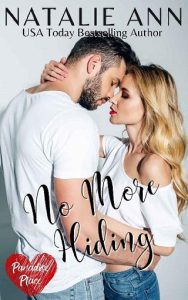 Vivian Getman is not the person she used to be. With her father in jail and the death of her mother, her grandparents helped her recreate herself and start over. Thirteen years later she is all alone in the world and moves to a small development called Paradise Place, in Upstate New York, across the country from where her life began. She is ready to live for today and hope for tomorrow until the threat of her secret gets in the way.

Brent Elliot is exactly who he says he is. A grouchy hermit that is anti-social. The death of his twin sister as a teen, then his best friend in the line of duty a year ago, sends him into isolation in a town in Upstate New York. When he meets Vivian Getman he is torn between the love he has for her and the secrets he thinks she carries. Crossing the line to find out those secrets just might mean the end of what he’d thought he’d never have.