Home
Thriller / Suspense
No Going Back by T.R. Ragan (ePUB) 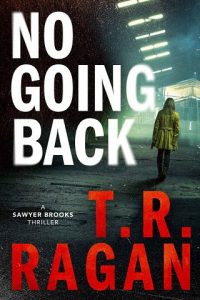 The biggest story of a crime reporter’s career could be her last as fury, vengeance, and justice collide in this breathtaking thriller by bestselling author T.R. Ragan.

Some call it murder. Others, karma. The female vigilantes dubbed The Black Wigs call it justice. The victims? Sexual predators who never paid for their sins. For three months, The Black Wigs byline has belonged to Sawyer Brooks, a crime reporter still struggling with her own demons. But for Sawyer, there’s suddenly more to the story than just catching the dark web avengers.

Copycat vigilantes are cornering the unchecked abusers of Sacramento and uploading the men’s abject fear to social media. The trending insanity isn’t making Sawyer’s job any easier. Neither is a new murder—another predator, but one who doesn’t fit so neatly into The Black Wigs’ agenda. Something even more sinister is at play.

As she follows every lead, someone with the answer is following her, determined to bring Sawyer to her knees. Because soon enough, for both Sawyer and a killer, the truth she’s been looking for will be a punishing revelation.