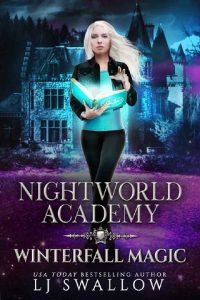 I changed everybody’s lives the day the academy fell, and now I can’t see what the future holds for any of us.

Winterfall Witch is a continuation of Maeve’s story after the Nightworld Academy series ends.

We survived the massacre at the academy and retreated to safety at the Winterfall estate, but life isn’t calm.

My mother had four consorts. Where are these men, and can they break the Winterfall curse? Tobias wants me to accept our situation, but I refuse to let this go. I’m obsessed with discovering more about my past, including which of Astrid Winterfall’s men is my father. I know the names of three, but I need to find the fourth.
Tracking the men down proves difficult, and our family reunions aren’t easy because there’s more to my legacy than I realised. Astrid had secrets too.

My bond with Jamie grows as we spend more time together, Ash fights against a future that the shifter council expect him to embrace, and Andrei continues to struggle with the changes he’s facing.
The aftermath of the academy deaths has far-reaching consequences as the accords between the vampires, witches, and shifters begin to break. Gabriella survived that night, so where is she, and what are her plans to take advantage of the discord?

Winterfall Witch is an additional book in the Nightworld Academy world. The events take place immediately after Term Six and continues Maeve’s story after the series finishes. The series must be read first.