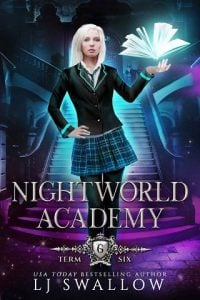 From the first day I arrived, I knew the Nightworld Academy held secrets. Now, I’ve discovered I’m the greatest secret.

My time with the Blackwoods opened my eyes to a frightening side of the new world I belong to. The night brought me closer to Tobias, but now he’s discovered a hidden connection that tears us apart. My reality turns upside down for the second time since I arrived at the academy and my visions become more horrific.

Ash’s strength and Jamie’s empathy help me cope with the shattering news, and we begin to uncover more of the truth. My relationship with Andrei remains intense, and we have an issue to confront that’s followed us from the first day. And however big the divide between myself and Tobias, he has a role in my life that neither of us can avoid.

Theodora’s response to our latest discovery isn’t what we expected, and I’m shocked when the academy remains open and she announces the final challenge. Can the head professor’s attempt to bring the houses together succeed, or are darker forces at work that she can’t control?

With Petrescu students behaving strangely, the conflict between the witches and vampires intensifies. And as Gilgamesh’s strongest shifters leave campus for secret meetings, Ash discovers that our world could be threatened by more than the Dominion.

An attack on the academy is imminent, but we don’t know precisely when. If my magic is more central to the situation than I realised, we need to act fast to save the academy and students.

But my biggest fear isn’t that my magic might fail—I’m terrified that someone I love will die.