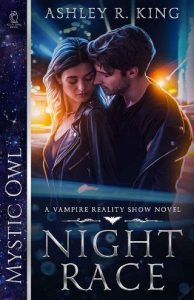 Theodora “Theo” Nash is over being a vampire and wants nothing more than to become human again. Maybe then the guilt and regret from over three hundred years ago will finally wane.
When she hears of Night Race, she signs up immediately. The reality show requires locating a spelled chalice that can grant her wish—turning her human. It can also turn humans into vampires, but she’s not interested in all that. But of course, there’s a catch. She’ll be teamed up with a human to race across the world, completing different tasks and challenges to get closer to the chalice. Although a human will slow her down, it’s worth a shot.
Aiden Archer wants to become a vampire. It’s a necessity in his plan for revenge. After his fiancée was murdered by a vampire four years ago, he’s desperate to protect the ones he loves. What he doesn’t expect is to be teamed up with a grumpy vampire who feels Aiden only holds her back. When contestants start disappearing, he worries for their safety.
Amidst murder and hijinks, Theo and Aiden race against the clock and the night to win the chalice and to understand the workings of their hearts.