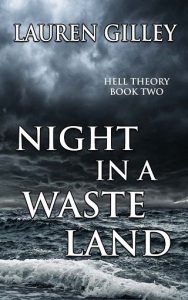 Rose Greer sacrificed a hell-forged weapon, and her own blood, to bring Beck back from hell – a changed Beck, one winged, and horned, and tailed. Her captain wants Beck to step up, and help their war effort; which he does, in a terrifying way that none of them expected.

In the second book of the Hell Theory series, revisit the five years between Beck’s “death” and resurrection, when Rose joined the Rift Walkers and became hopelessly entangled with her sergeant, Lance du Lac: mentor, lover, and ally in her quest to bring Beck back. And in the present day, walk the streets Rose once hunted with Beck, that they will hunt again, in the midst of a war between heaven and hell.

“Night in a Waste Land” is the second in a new supernatural/horror erotica series based loosely on the legends of King Arthur and his Knights of the Round Table, set in the not-too-distant future. Featuring angels, demons, mythology, monsters, plenty of steam, and an eventual OT3. Dark, weird, and sexy, Hell Theory isn’t for the faint of heart.