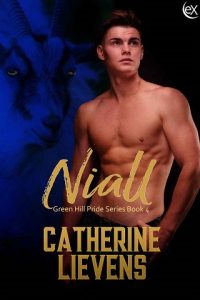 Niall doesn’t have a problem with shifters, but can anyone blame him for not trusting them entirely? It has nothing to do with who they are, but rather with the fact that the pride has been in hiding for too long—okay, and maybe it’s because both his best friend and his dad are dating shifters, and he’s kind of jealous.

Billy didn’t mean to become a runaway groom. Instead of marrying his long-time boyfriend, he’s back in his childhood room in Green Hill, and he has every intention of hiding there as long as he can.

But Billy’s mom is dating someone, and while Billy is happy for her, he wishes he could avoid the man’s son, Niall. Niall is rude and doesn’t let Billy forget he almost ran him over with his car—he was overwhelmed, all right?

There’s no ignoring that Niall is Billy’s mate, though, no matter how much Billy wishes he could. Finding his mate is the last thing he needs, especially when Niall is the grumpiest man he knows. Can he ignore their bond, though? And even if he wants to give this a try, will Niall?