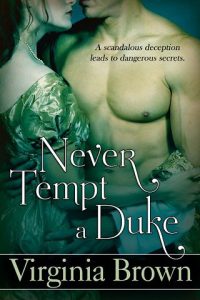 He could not forgive her deception. She could not resist the desire they shared. When a scandal forces them to marry, their passions lead to dangerous secrets.

American-born Alyssa and her twin brother arrive in England after the death of their father reveals their high-born heritage—he was the heir to an earldom. Now they have been placed in the guardianship of the handsome, jaded Duke of Deverell. Alyssa’s brother, Nicholas, will be schooled in the strict manners of a future earl. Alyssa will be sent to a convent. Both are horrified at their prospects, so they switch identities. Nick heads for a life at sea. Alyssa, disguised as a boy, takes his place in Deverell’s household.

The cynical but mesmerizing Deverell is a tough taskmaster; though his frail-looking ward is spirited and witty, quietly winning the duke’s affection, Deverell insists on harsh standards that challenge Alyssa’s determination to keep the ruse going. Her feelings for Deverell complicate the situation even more; her young heart falls deeply in love with him. Even after her deception is discovered and he sends her away, she can’t stop desiring him. For Deverell, a man whose secrets are locked inside memories of painful betrayals, she will always be a deceiver at heart.

Returning as a beautiful and fully grown young woman, Alyssa takes his breath away. Yet the deceiver in her has only grown bolder.

And so begins a turbulent marriage filled with seduction, heartache, and passion. She fights to find the man who guards his feelings for her behind an impenetrable wall. It will take dangers from outside their marriage to break down the barriers between them. If they survive.