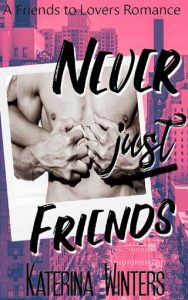 They were friends.
She was like family.
Dammit, they were just friends…right?

Maritzia DeLeon has been Cade’s best friend since the day he moved into her family’s apartment building in middle school. Accepted into the fold of her big family, they grew up together running around the streets of The Bronx like they owned them. It took shipping off to the army for seven years to realize just how golden those years were by her side. But now he was back, and though some things have changed their friendship hasn’t—right?
She was like family.
Yet with every caught stare and lingering look Cade could feel the unavoidable truth rising to the surface.
She was a friend.
So why were his nights plagued with dreams of breaking her boyfriend’s jaw and pulling her into his arms where she belonged?
They were just friends.
Maybe, if he said the words enough times—he could start believing them.