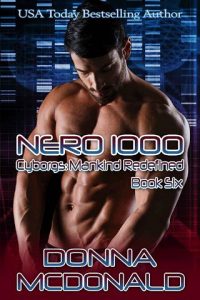 Locked in the cage of an insane cyber scientist who calls himself Creator Omega, Nero waits for his captor to decide his fate. Having seen Creator Omega’s horrific failed experiments, Nero knows his body is about to be cybernetically altered forever. Even knowing that, he’s not sorry he traded himself to free Aja Kapur. He would do it all over again.

Though Nero doesn’t know what Creator Omega did to the female cyborg to remove her memories and gain her obedience, he knows Kyra will fix her—if Aja finds her way back. One thing is for sure, Aja’s fellow female cyborgs, Lucy and Meara, will never stop searching and will fight to the death to save her.

Hell has no fury like an abused female cyborg seeking revenge. But who will save him?

Peyton will try. All of the cyborgs he helped restore will try. His captor may be a tipping point for the next world war. He prays that doesn’t happen, but the injustice of people being cybernetically without their permission must stop. Kyra is right about that. She’s always been right that the cyber soldier program failed humanity. And well his gods know that he played his part.

But Creator Omega doesn’t care about what anyone thinks of his evil. His madman captor wants a new right-hand man. He used Aja as bait to lure him there. Now he has exactly what he wanted all along.

For Nero, that means it’s already too late. He’s about to become something no one ever may be able to save.