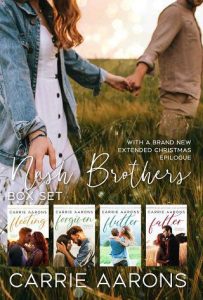 Four gorgeous brothers, one small town, and the women who drive them wild. Grab these four small town, contemporary romances and a brand new Christmas extended epilogue in this box set from bestselling author Carrie Aarons.

PLUS: A brand new, never-before-released Christmas extended epilogue featuring a chapter from each brother!
More about the books inside:

Presley McDaniel lives her life from moment to moment.
Love and commitment are predictable.
So why, the moment she lays eyes on him, are they all she wants?
Keaton Nash has never questioned his steady path.
Except for the first time ever, he wants to abandon stability.
She makes him want to be reckless.

In a split-second, a car crash killed almost everything between them. Ten years later, can one accidental ride fix tattered spirits, uncertain futures, and broken hearts?
Lily Grantham has always done what she’s been told.
Bowen Nash never wanted the life he’s trapped in.
They’ve been fighting fate for as long as it’s been chasing them. And now, time is up.

He can’t stand her, and best believe, the feeling is mutual.
Her life is the complete opposite of what he desires.
So, why can’t they keep their hands off each other?

Forrest Nash is a smug know-it-all.
Penelope Briggs is one bossy, obnoxious woman.
What started as a convenient friends-with-benefits situation is quickly growing wings. Even if both parties are trying hard to ignore the flutter.

Ryan Shea has sworn off men.
Fletcher Nash vowed not to fall in lust.
They pledged not to love anyone until it was the real thing.
So what happens when two people terrified of falling head-over-heels, actually do?