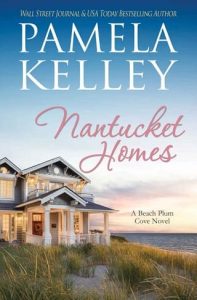 It’s Fall on Nantucket–and change is in the air!

There’s a new arrival to the island. Kay Johnson, a widow, was a friend of Lisa’s mother and is like an aunt to Lisa. Kay is excited to relax and enjoy Nantucket—she’s already signed up for a Needlepoint class. She’s not at all looking for romance, but she is happy to make a new friend in neighbor Walter Sturgess, a widower.
When the story begins, Walter’s son Travis, CEO of a tech company he founded in Silicon Valley, and his four-year-old daughter, Sophie, are living with Walter until Travis’s new home is ready for them to move in.

That new home is being built by Chase Hodges, Lisa’s son, and is located on the ocean, next to the home where Victoria grew up–and is now living temporarily with her parents, since she and Sean—her long-term boyfriend and fiancé, broke up.
When she sees Travis for the first time in many years, Victoria realizes he is in a similar place, since his divorce. She didn’t even recognize Travis at first. He had to remind her that they’d once dated in high school, before she dumped him for Sean, the star quarterback. Travis is all grown-up now, but even if she was interested in dating, Victoria has never been anxious to have children, let alone take on someone else’s.

Meanwhile, Lisa’s online food business was growing steadily until recently when she discovered several competitors making copycat lobster quiches and it is affecting her sales. Marley, her marketing advisor, studies the situation and advises what Lisa thinks is a questionable suggestion- but she’s willing to give it a try.
Chase and Beth are also dealing with some unwelcome competition, when Chase discovers that he’s losing new business bids to an upstart construction company–that is underbidding by such an amount that Chase can’t imagine how they are making a profit.
And speaking of babies, Victoria isn’t the only one who isn’t sure she wants to have children. Now that she and Tyler are married, Kristen has been thinking a lot about that as well.

Come back to Nantucket and see what all of your old friends are up to. If you like romantic women’s fiction and family focused stories you might find yourself addicted to this series. Be sure to start with book one, The Nantucket Inn.