Home
contemporary romance
My Song For You by Stina Lindenblatt (ePUB) 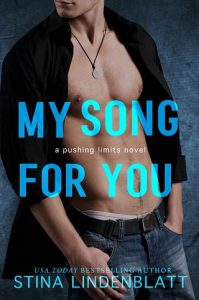 Bad-boy rocker Jared Leigh is about to meet the biggest challenge of his life…his deaf four-year-old son.

At twenty-one, I had been prepared to give up my dream of touring with a rock band to become a father after getting my ex-girlfriend pregnant. But when she told me she’d gotten an abortion, I was devastated.
Now five years later, I bump into her little sister, who I haven’t seen since high school, while she’s grocery shopping with four-year-old Logan.
Sparks flare between Callie and me that didn’t exist before.
But soon I grow suspicious when I realize her deaf “son” is the same age as my own child would have been.

*** When Jared demands to know more about Logan, I panic.
There are things I can’t tell him. Besides, Jared is a bad-boy rocker, not a dependable father figure.
Trouble is, Jared refuses to be pushed away. And the more quality time he spends with Logan, the more I start to fall for him and envision us as a family.
But falling for him is far from a good idea—because when Jared’s band hits big time, Logan and I will prove to be nothing more than a passing phase. Right?

My Song For You is a standalone romance. All the books in the series can be read in any order. The novel was originally published under the same title by a traditional publisher.