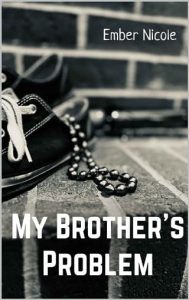 In the midst of finishing her education and working toward a stable career and a promising future, Elodie met the man of her dreams. Her life seems to have finally leveled out after surviving a rough upbringing with significant help from her older brother. But when her relationship takes an unexpected and dark turn, she’s forced to dig a little deeper into the life of the man she loves in an attempt to uncover who he really is.
Detective Latham Williams swore his life to ridding the streets of dangerous criminals in a desperate attempt to leave his city in safer conditions than the ones in which he’d grown up. His childhood was plagued by his own neglectful parents and having to learn how to care for the girl next door, his best friend’s sister, who was being abused herself. When he learns that Elodie is dating a prominent criminal defense attorney, Latham’s concern for her safety and her sanity causes even bigger problems for both of their lives. Latham tries to navigate his tension-filled friendship with Elodie without putting her further in harm’s way, without stepping on her brother’s toes, and without sacrificing the attention that his job requires.
But what Latham doesn’t realize is that Elodie doesn’t need saving. She’s got secrets of her own. A darkness of her own. She was willing to look beyond minor disagreements and to understand that all relationships have their struggles, but she refuses to spend her life as a victim. She’s spent her time in that role and she isn’t going back. Now, she’ll let that darkness out once more to see if she can save herself a second time.
In this dual perspective, dark romance, three lifelong friends spiral through hateful accusations, uncover the secrets locked behind years of traumatic relationships, and try to learn who can really be trusted when they all realize they’ve become tangled on different sides of their city’s most notable crime boss.
WARNING
This book may be triggering to some readers.
It is a dark and disturbing romance with mentions of rape, incest, and pedophilia. There are violent and graphic sexual encounters, references to drug use and prostitution, along with the constant presence of a controlling and manipulative douchebag.
If you’re not into it, don’t read it.
If you are into it, my crazy welcomes your crazy to My Brother’s Problem