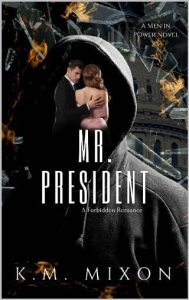 Dashel Beckford is America’s 47th President. He’s the second unwed president to be sworn in and he’s also the youngest president at only 38. He’s focused on his plans to turn the country around. He’s determined to be better and do better. Until she saunters into his office in those purple pumps with her soft, subtle curves. That’s when it all goes to shit. That’s when The White House begins to feel a little too small for President Beckford.
Winifred Kirk is the secretary of the next sitting president, and she wasn’t ready at all for the job. She’d helped to campaign, sure, but The White House? The job is complicated enough with all she has to manage, but her personal life is in shambles. Her father is sick, and her love life is coming to a crashing halt after a divorce she never saw coming. When she walks into the office of President Beckford and gets an eyeful of the man she’s going to be working near daily, she knows she’s bitten off far more than she can chew. The man is stunning, and she doesn’t quite know how she will survive the enigmatic and dark-tinged 47th President. But for the money it pays, she’ll endure. Or will she?
Watch as these two fight an attraction like no other. President Beckford is determined to not besmirch the office with sex as so many before him have, but will the temptation of Winifred Kirk prove to be the catalyst to just such an act?