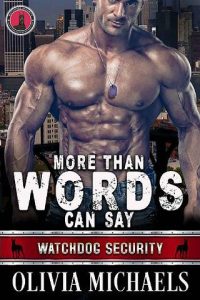 Malcolm McCoy is a former FBI agent turned black-ops. He goes where the job takes him, whether it’s gathering intel in an office or undercover with the darkest dregs of humanity. After everything he’s seen and done, his reassignment to Watchdog Security should be a walk in the park—with a dog no less. How hard could it be to protect a glamorous star or two? But the gorgeous woman he meets at a Hollywood party is no starlet, even thought she outshines every star there, and their immediate attraction is undeniable. Figures he’d be called away before he can get so much as her last name.
The emergency turns out to be a literary agent who approaches Watchdog on behalf of one of his clients, bestselling thriller writer Annalie Givens—who Malcolm just met. Her book has attracted the wrong sort of attention—a ghost from Mal’s past that holds Annalie’s future in his murderous hands. Can Mal stop a killer from repeating his bloody pattern before he gets to Annalie?