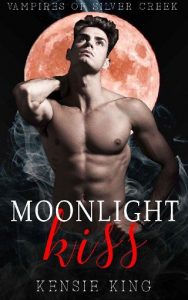 We only have one rule: don’t tell humans who we really are. Vampires. But what if the one you’re destined to be with is human?

Jonathan Monroe has been part of his clan of vampires since they settled in Silver Creek. He honors his leaders’ wishes about keeping their secret from humans, though he doesn’t see humans as a threat. They intrigue him. Flesh and blood with real lives, real worries—real heartbeats. But he keeps his distance even though he feels like he’s missing something. When he sees a car slide off the road one night and rescues the man inside, he’s sure he’s found the person he’s meant to be with—even though it goes against everything their kind stands for.

David Reynolds has always taken care of himself. A job, a home, a new start. But coming to Silver Creek left him with a hole he can’t seem to fill. Until he meets Jonathan Monroe. Since Jonathan saved him from near death, he feels a special connection to him he’s never felt with another person in his life. Nothing can deter it—not even Jonathan’s secret. But when he finds out the truth about his savior, his entire existence is put in jeopardy.

Jonathan is willing to do whatever it takes to keep David safe, but it might mean risking everything to stay with the man he’s fallen for.