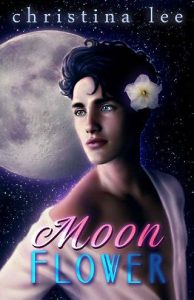 When Galen flees his home and travels to Lunar’s Reach, he does what he needs to survive. But trading his body for food in his belly is always a risky undertaking. After he’s found injured in an alleyway, his new friends take him to Moon Flower apothecary, where the madam in charge offers him the proposition of a lifetime.
Little does he know that the Moon Flower flourishes at night—in more ways than one. Gentlemen gather in secret, yearning for an evening with Galen and the others, where they offer pleasure willingly while exploring their desires.

But Galen’s eye is continually drawn to the most unassuming man in the room—Azriel, the resident healer, who has the most unusual aura Galen has ever seen. There’s an understated melancholy in him that Galen longs to soothe, and the more time they spend together, the more he craves to know Azriel’s touch.
But security is only a threadbare veneer for those like him, and soon danger is upon their doorstep. Galen has only ever needed to protect himself, but now he belongs to an ensemble of unlikely characters who’ve become the family he never had. So he’ll put himself on the line, along with his heart, if it means keeping them safe—especially Azriel, the man who quiets his restless soul.

Trigger warning: Discussions and depictions of assault which are physical and sexual in nature, as well as a background characterization that some might find taboo or unconventional.