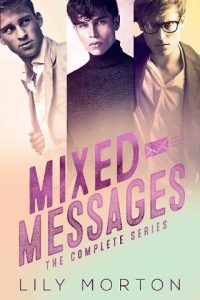 The bestselling Mixed Messages series is now available in one collection. Set in London, it follows a group of friends as they each find love with a lot of heat and humour along the way.

Rule Breaker
Dylan has worked for Gabe for two years. Two long years of sarcastic comments. Two long years of insults and having to redo the coffee pot four times in the mornings to meet his exacting standards. Not surprisingly, he has devoted a lot of time to thinking of inventive ways to murder him. Dylan has thought of everything from stabbing him with a cake fork to garrotting him with his expensive tie.

But then a chance encounter opens his eyes to the attraction that has always lain between them, concealed by the layers of antipathy. There are only two problems – Gabe is still a bastard, and he makes wedding planners look like hardened pessimists.

Deal Maker
Jude is a highly successful model but a very reluctant one. His life is full of casual hook-ups with pretty men in glamorous locations, but it’s still empty. Nevertheless, circumstances decreed a long time ago that this was his path, so he’s resolutely stayed on it and accepted his fate with good grace.

However, an accident at home has him making a new deal and accepting the offer of help from an unlikely source. It leads to an unexpected summer of falling in love with a larger than life man and his child.

Risk Taker
Henry is the odd man out. All of his friends are settling down, and his reputation as the Hook-Up King of London seems more like a curse than a blessing these days. Especially when it keeps photojournalist Ivo, his best friend and the brilliant man he’s loved since they were fifteen, at arm’s length.

But Henry knows that’s where Ivo wants him. So putting aside his feelings, he decides to give up casual sex and look for the real deal. After all, he has no chance with Ivo – or does he?