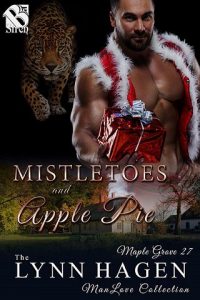 Payton loathed Christmas. He wasn’t a scrooge, but try growing up with his parents, who argued nonstop, and the holidays were torture. Add to the fact that he’d just been released from the hospital because he was shot twice in the back, and Christmas could kick dirt. When his cat gets trapped in a brick tomb, Payton is desperate to get him out. He just hadn’t expected Mr. Hottie to come to the rescue or for the hunk to save his Christmas spirit.

Miller had no idea he would find his mate when he went on a late-night emergency call. He just didn’t expect his mate to be so stubborn. Payton refused to get into the holiday cheer, and worse, he and his cousin witness a murder. Now Miller’s only priority is to keep Payton safe, while trying to convince him that Christmas can be a wondrous time of year.