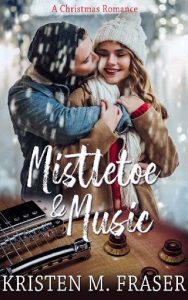 A famous musician. An unrequited love. And the small town where it all began.

Lily Rymmer thought she’d have it all together by now. But she’s learned the hard way that life never works out as planned. Divorced and working two jobs, Lily lives with the torment of an unrequited teenage crush on her brother’s best friend, and the fact that he skipped town a decade ago without even a backward glance. His soulful voice on the radio does nothing but bring back all the memories she’d desperately tried to suppress. With a busy holiday season fast approaching, and the town’s Mistletoe Festival to organize, the last person Lily expected – or wanted – to see again was Todd Casson.
From the age of nineteen, Todd Casson had the world at his fingertips. Leaving the small town of Freeson, Michigan behind, he found fame and fortune with his guitar and never looked back. But ten years after the death of his best friend, Todd is worn out from the superficial lifestyle of the music industry and from the guilt that gnaws away at him. Returning home, he longs to leave the past behind and find himself again.
Todd has never forgotten his best friend’s sister. And it seems like she hasn’t forgotten him either. Except the kindness in her eyes has now been replaced by hurt and pain. And she is nothing like the girl he once knew.
What will it take it take for Todd to break down the walls around Lily? Will Lily be able to forgive past hurts and learn to trust again?