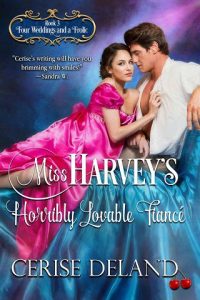 Theirs was to be The Wedding of the Season!
Until the bride ran away and…
The groom chased after her.
Then she tried to shoot him…
And thankfully aimed poorly.
How can this escapade end, if she’s marrying him for his titles?
And he’s marrying her for her money?
Yet their affair appears to be the Romance of the Year!

Miss Esme Harvey fell in love with the Marquess of Northington quite by accident. She’d never met him before that one night at a Christmas ball when she happened upon him in a dark salon. Certainly, she had heard of him, but never reached so far above her station as to think he might consider her marriage material. After all, he is the heir to a duke. And she? Ah, well. Merely the daughter of a lowly viscount.
But her Papa is rich as sin. And Northington’s Papa likes money. Lots of it.
So there is the rub.
Because the duke must sign the papers to truly make the ton accept Esme. And he refuses.
Northington seeks a way to convince the old man. But Esme takes matters into her own hands….
And runs away.
But the groom will have nothing for it but to follow her!
How he does it, when and why is a revelation to his father—and to Esme!
The Wedding of the Season should become The Romance of the Year!