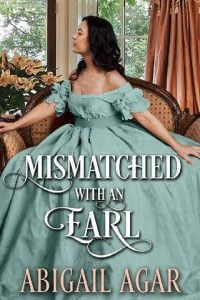 Mismatched with an Earl by Abigail Agar – Free eBooks Download

As the young and intelligent Selena Dankworth returns home with her father, she witnesses a carriage robbery that will turn her life upside down. Even though her bravery saves Lord Ainsworth and his mother from the bandits, she gets overwhelmed by his ungrateful and pompous behaviour. Yet, in the weeks to come, Selena will be forced to cooperate with the unbearable Earl, in order to separate their parents, who fell in love after the accident. When their first effort fails, she sacrifices her freedom and agrees to a fake engagement with the Earl. However, when the plan succeeds, Selena will find herself in distress, as her pure feelings for him have started to grow… Will her concerns about her low status stand in her way of finding true love?

Nicholas Addington, the Earl of Ainsworth, a charming but proud man, has spent the last year trying to live up to his father’s memory. Yet, his world will be shaken after being attacked by bandits and rescued by a mysterious woman, who looks like no one he has met before. Little did he know that he would soon act to be engaged to this wildflower, in order to rescue his mother from a foolish plan. However, his initial disapproval of Selena’s character will turn against him when their scheme leads to a fascinating romance. When Nicholas gets to know Selena more, his disdainful attitude towards her will turn into undeniable affection… Once their little act is revealed, will he be able to let go of her?

Selena and Nicholas’ lives intertwine under the most unexpected circumstances, and even if they do not wish to admit their self-consuming feelings for each other, they fall deeper in love every day. However, when their mismatch seems to turn into a dreamy love story, a wicked lady, who hopelessly craves the Earl, will threaten their happy ending… After everything, can this turbulent affair, that started off as a fraud, become something more? Will Selena and Nicholas manage to overcome their pride for the sake of unconditional love or will their lives take separate ways forever?