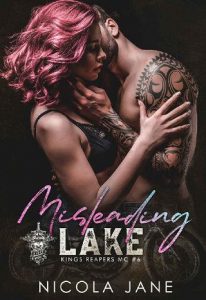 Sara:
What’s so wrong with being the fun party animal who likes to experiment, meet new people, and take guys home for one night stands? Well, not all the time, obviously.
Meeting him was a game changer for me, in more ways than one. We both liked the same stuff, yah know, in the bedroom. It didn’t hurt he was bloody gorgeous. Not my usual type, but with parents like mine, I have to stick to their rules.
But Lake, he blew the damn rules right out the window and before I knew it, we were hooking up more often than actual couples in a relationship.
I was honest, told him straight I wasn’t looking for anything serious, cos I’m not that type of girl, but the universe had other plans. Now, I’ve got to grow up and take responsibility for the mess I caused. The mess we caused . . .

Lake:
I landed on my feet when I met the female version of me. Sara was kinky, wild, and willing to do anything to annoy her stuck-up parents. It was a bonus that neither of us were looking for a relationship—straight up booty calls were our thing.
Then came the bombshell, and I ain’t talking the blonde kind.
She doesn’t expect anything and she’s made it clear I’m not on her future plan, but since when did she get to make up the rules?
It’s not so easy to walk away now I know her secret.
All I gotta do is convince her I’m not going anywhere.
Not now, not ever . . .