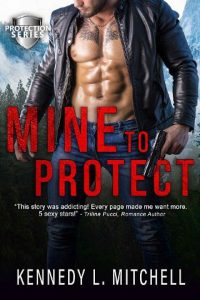 A standalone, romantic thriller novel where obsession is the name of the game.

Recruited to the FBI Cas Mathews has one focus – catch the killer. That’s until officer Alta Johnson shoves her way on to the team, making him fantasize about the delicious curves she hides beneath her park ranger uniform. Alta’s natural beauty catches his immediate attention, but the strength behind her fierce gaze is what holds him captive – demanding he learns more about her.

As the team grows close, the serial killer shifts focus putting them all in danger. Cas should walk away before their sizzling attraction distracts him and gets them both killed. But as the threat pushes Cas and Alta closer, the temptation turns too hot for either to resist.

With their focus diverted the threat zeroes in, catching everyone off guard. Figuring out the players in the killer’s cat and mouse game is key to Alta’s survival. Cas swore he would protect her but with the clues carefully hidden, can he figure it out before Alta disappears for good?