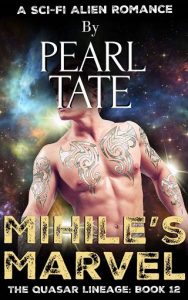 Mihile: I hate being trapped underground. With the planet Quasar uninhabitable on the surface, my entire life has been spent without sunlight. Since I was born blind, it’s kind of fitting.
With my lack of vision and light skin and hair, I represent not only the most unique features of our species, but also the most shunned. Even with my political connections, I have few friends and no female prospects for any kind of commitment.
I think I’ll always be alone in the dark until I see her. Suddenly, my sight begins forming, and my already excellent hearing becomes super charged. Now, I find out almost everything I believed was a lie. Our planet is inhabited above ground, and even though my doctors don’t tell me themselves, I’ve mated.
I’ll never be alone again—if my mate makes it to me.
The ruling bodies of Quasar are conspiring against the males who’ve mated… maybe even killing them. Will the spacecraft carrying my mate make it to Quasar? And when they do, will we be able to expose the conspiracy and all those involved?
How can we possibly stop something that runs so deep, when there’s no way to let everyone know the truth?

Tara: Every day, every decision, whether it’s large or small is based around my safety. Where I go, how I go there, and with whom is all carefully weighed.
Despite my family’s diligence, between a hospital visit and attending college, I’m assaulted on a bus, and I end up fighting for my life.
Given the choice to leave Earth by the equivalent of alien matchmakers, I decide to take the plunge. I’m sick of the fear and female suppression my government enables. I’m told that my mate has endured a similar plight, and I’ll have a part in changing that for his species.
But my mate’s planet is under siege by the Marel, an insect-looking species of alien that accosts us on our way to Quasar. We escape but find out more are on the way. They’re working with someone high in power on the planet, and we need to expose the female’s original treaty with the Ashen in addition to this new threat.
Is it too late to save the clueless on the planet Quasar and offer them new protection? Will the Marel be able to set up their breeding farms when their backup arrives?
Will the population of Quasar even believe the threat is real before it’s too late?