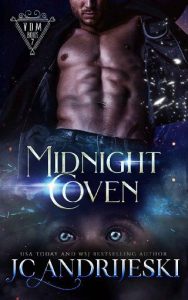 They’d put him into the shadow worlds.
They’d taken him from his home.
But he would return now. He would return to where he belonged.

Home lives a lot further away than Nick Midnight ever imagined. Yet, for the first time in two hundred years, he can contemplate going back.
No way is he going alone. He has a new family here, in this version of New York, and he’s not going anywhere without them. He’s especially not going anywhere without his mate, Wynter James, and the two orphan seers he more or less adopted.
But Nick’s not the only vampire who wants a way out of this dystopian world.
He’s hunted by a shadowy force, a dark Stranger, someone who wants Nick’s life and family for himself. Whoever this Stranger is, he believes Nick stole everything from him, and he wants Nick’s coven for himself.
Like Nick, the Stranger wants to take them from this world, only he intends to leave Nick behind.
Worse, Nick’s fellow cops are skeptical the Stranger even exists. They finger Nick as the vampire leaving corpses all over town. If Nick doesn’t catch the real killer soon, he’ll end up in prison himself, and lose his family forever.