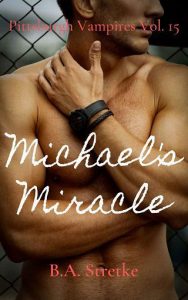 Michael King is a Coven Guard and Soldier for the Hadden Coven. He’s seen many changes, and the Coven has grown and prospered, and new beloveds were added to the fold. Every vampire hopes for their time when fate gives them their predestined love. For Michael, this moment occurred very much out of the blue. He was on guard duty in the great open-air plaza at the Hadden Center; it was a dark and dreary night as he felt drawn to the center of the plaza and a man on a stone bench looking so lost and alone. The closer Michael got, the more this man awakened something within him. What Michael is about to discover is that this man, alone and lost on a dark night in Pittsburgh, is about to be the miracle which changes his life forever.

Cole Fairfield is on his own now, tossed out by his brother from both his job at the family company and his life as he knew it up till now. Walking the dark streets of Pittsburgh alone in his Brooks Brothers suit, he knows he sticks out, and that makes his situation all the more dire. He finds his way to the Hadden Center plaza, hoping to just stay the night in relative safety and plot his next move. What he doesn’t expect is for that decision to change his entire life.

The path won’t be easy, Cole’s brother has evil plans in store for his brother, and both of them will be caught in the crossfire. Fate never misses a moment. Cole and Michael find each other just when they need it most.