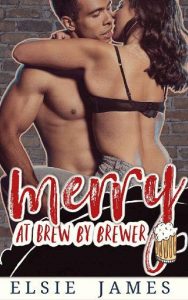 He’s running from his past. She’s looking to build a future.

Merry is a single mom Christmas instalove romance. It is the second in the Holidays at Brew by Brewer Series.
After Stella’s wedding went up in smoke, she’s more than ready for the season of cheer. With her track record of choosing the wrong men, she’s determined to go it alone. Being a single mom won’t be easy, but she’s up for the task.
Roman is lonely, but after the life he’s lived, it may be better that way. His plan is to make up for his past one day at a time. But could an adorable little girl, a sassy cat, and an ugly sweater be the keys to all that’s merry and bright?