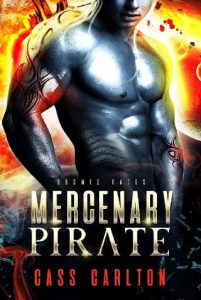 A deal with the devil…

Makron, known as Mak to many, is a skilled pirate whose services are in high demand. His ship, Wanderer’s Dream, has contracts lined up for the next five years. Despite being a well-known pirate, Mak is respected by many and is often invited to lavish parties and exclusive getaways by his clients. However, today is all about work as Mak and his crew engage in a battle with another pirate, Asben-Felek, who has sent mercenaries after Mak after he stole a valuable cargo from him. Despite some damage to his ship, Wanderer’s Dream is able to emerge victorious in the fight and Mak plans to make repairs before setting off on their next job.

Farah is the captain of a tow ship, leading a loyal crew through the universe to tow broken down ships and work as scrap dealers. Despite having had a few relationships in the past, they never end well for her. Farah becomes increasingly suspicious of Mak and runs a scan on his ship.

Drawn to each other, yet fighting the attraction, the two go through the age old escapades of enemies who wouldn’t mind being lovers. If only for a minute or two.

Mak makes a deal with Farah and she reluctantly agrees. As they travel, the tension and attraction between Mak and Farah grows. Will it be a hindrance or will it prove to be dangerous as they navigate hazardous situations and confront their pasts.