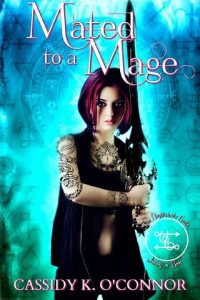 An assassination in the Elven Court; an orphaned infant Princess; and twelve mages who have sworn to protect her.

The Elven court has tasked the Nightshade Guild with keeping Princess Ameria protected until the assassins are found and the Kingdom is stabilized. Isla Ryan has no experience with babies and is less than thrilled to take the first shift. When word gets out that the Elven Kingdom is vulnerable, everyone wants to get their hands on the orphan.
Killian Stewart arrived in Ireland desperate to heal from the PTSD he suffered after three tours of duty. He expected a quiet time on the Cliffs, instead he ends up on the run from creatures he didn’t know existed, with a woman who claims the Supernatural is real, and an infant that can make it rain.
Together, they’ll criss-cross Europe and try to stay one step ahead of the creatures hunting the Princess.