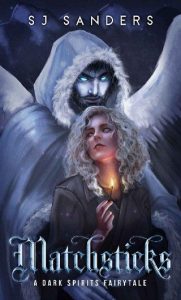 Following the Ravening, the world changed for everyone. For Agatha Ward, once a successful interior designer, those changes have been a succession of one miserable year after another wherein she has only barely managed to survive through simple labor. Selling match sticks outside in the snow on solstice night is not her idea of a good way to spend the holiday nor a promising beginning for the new year, but she hopes to make enough to at least buy some fuel for heat and some food.

When a golden stranger steals a pack of matchsticks and leaves behind a box with five gold matches, she is drawn into another world inhabited by monsters. Ruling over them and the northern mountains is a winged king of the north wind, Aquilo. He is dark and cold as winter itself, but as she returns with the flare of each matchstick, she discovers a warm heart and hot glances behind that icy reserve that makes her long for forever. If only she wouldn’t keep returning every night back to that same frigid street. With her matchsticks running out, will she have a chance for happily ever after?

Aquilo has known no warmth or comfort. His fortress is as cold and lonely as he is. With naught but his griffins for company, and the ogres and lupi who serve him, he yearns for any sort of spark to warm him. When a human arrives on his mountain, her presence seems impossible but no more so than the spark that heats within him at her nearness, yet every night she disappears. He’s certain that another god is toying with him, yet the longer she is there the more he realizes that she is all that he wants. But will he find her in the human world before the brutal harpies snuff out her light forever?