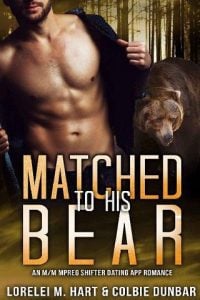 Matched To His Bear (The Dates of Our Lives #2) by Lorelei M. Hart, Colbie Dunbar – Free eBooks Download

Fate doesn’t use dating apps to pair true mates…except when it does.

Alpha Brad Galway is a hot successful lawyer and Beta of his Den with omegas throwing themselves at his feet. From the outside, it appears as though he has everything he could possibly desire. Inwardly, he has a bear clawing to get out—no longer willing to stand by and let his mate go unclaimed. But there’s a problem with his bear’s plan. Brad doesn’t know who or where he is, just that they crossed paths in an airport over a year ago. If he doesn’t figure out how to control his bear soon, he risks losing everything—including his life.

Human omega Gabe Rafferty is excited to start his new job as a professor of English Lit. Ever since a layover in an airport last year, he’s felt like his luck has changed. He can’t explain how or why…but something happened that day, and everything from that point was onward and upward. He just wishes he had someone to share it with.

When Gabe is talked into using a dating app, he isn’t expecting much until he stumbles onto profiles that are fixated on the TV series, Shifter World. And he definitely isn’t anticipating the smoldering alpha who recaptures that feeling he experienced at the airport. Sparks fly, feelings grow, and their worlds are turned upside down in the very best of ways, but is it too late for Brad’s bear?