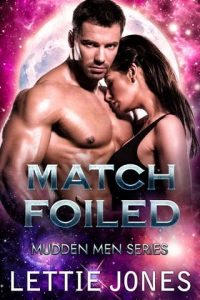 The Mudden men have a secret, and she can’t leave to tell it.

Nova is undercover. Figuratively.
Literally, she sleeps on the couch as far away from Altair as she can get. Sure he’s handsome, but that’s no excuse for being so full of himself. He’s also a stickler for rules, and he’d be the first one screaming for her death if he ever found out the truth about her hidden identity.
Not that she can avoid him either, he’s the guy she’s supposed to be spying on. Oh yeah, and she’s married to him.
She’s soon regretting her decision to come to Mudden, but she can’t escape until she finds valuable information. Her efforts might be in vain anyway, because whether she’s in his bed or locked up in jail, Altair has no intention of letting her go. The Mudden men have a secret, and they’re not letting her leave to tell it.