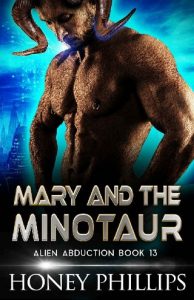 Although Mary has never had an easy life, she has always tried her best to maintain an optimistic outlook. But when she is abducted by aliens, it is difficult to find anything positive in the experience.
When she is temporarily abandoned by her kidnappers, she hopes to escape their clutches forever. Instead, she soon finds herself in even more trouble. Her only hope is a huge bull-like alien who should terrify her. Instead, her heart says to trust him.
Sendat has been working as an undercover agent for far too long. Although he believes in his mission, he fears he is becoming as heartless as those he seeks to bring to justice. And then he encounters a small, curvy female who awakens long-hidden feelings.
In order to protect her, he is forced to play a role he despises – and yet, she does not pull away from him. On the run and not sure who to trust, all Sendat knows is that he has to protect Mary. But even if he succeeds, will he have any choice except to give her up?

Each book in the Alien Abduction series can be read as a standalone romance. This sweet and steamy romance is intended for a mature audience only.