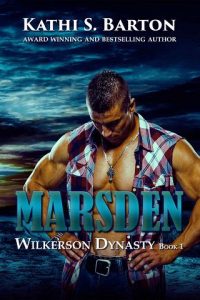 When Marsden Wilkerson received the phone call that his mother had been in a car accident, he wasn’t letting anything get in his way to get to her. Not a pushy boss, and especially not his Aunt Eita. Then his world crumbled when the doctors told him that his mother, Holly, didn’t make it.

Gabriella Farley, Abby, could hold her own, and she wasn’t about to take any flack from a rich bitch like Penelope Wilkerson. All the Wilkerson women, with the exception of Holly, could fit that description. Abby stood up for Mars at the funeral home even though she really didn’t know him. What she did know was his mother, Holly, was a fine woman, and the family had given them both the shaft Mars’s entire life.

Mars wanted to apologize for his Aunt’s actions, but there was something about Abby that sparked a flame in his heart. From the first kiss, they knew they had something special, but going against the Wilkerson family could be very dangerous. Will this new love be doomed from the start?