Home
Historical Romance
Married By May by Nadine Millard (ePUB) 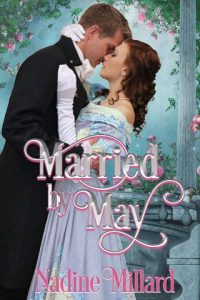 Married By May by Nadine Millard – Free eBooks Download

Her mother is determined to make her an Incomparable and secure herself a match by the end of June at the latest.
Her mother, in Beatrice’s opinion, is completely delusional.
She just doesn’t have what it takes to be the belle of any ball, and she would much rather stay firmly out of the limelight than be thrust into it. Besides, she’s never had an interest in London and its lords. She would much rather a husband of her own choosing.
Ewan Brooks has agreed to help his cousin Sir Edmund in a nefarious scheme to get his hands on the shy, unassuming Lady Beatrice’s sizeable fortune. He’s not happy about it but knows he doesn’t have much of a choice.
He’s determined to just do what he needs to get out of Edmund’s clutches then he can return to Scotland and forget them all.
However, a chance meeting with the lady soon has him realising that he can’t do it. Or rather, he won’t.
Ewan has to decide if his growing attraction to the beautiful Beatrice is worth risking his entire future for. And all before she’s whisked away to London for the dreaded marriage mart.
Meeting the handsome Mr. Brooks gives Beatrice an even bigger incentive to stay as far from Town – and gentleman who want her dowry – as possible.
But Mama will not be deterred from her plans.
There’s only one thing for it. If Mama wants Beatrice engaged to some Town dandy or other by June, then Beatrice needs to be married by May!