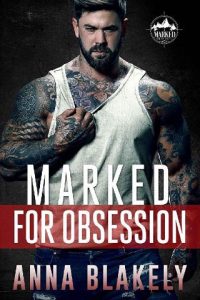 He’s a former Navy SEAL with an attitude. She’s a sweet, sexy woman with a target on her back. Together they have an unknown enemy with only one thing on their agenda…to kill them both.

Jax Monroe makes no apologies about who he is or what he wants. A self-made man, there isn’t anything he needs. Least of all the quiet, sexy-without-even-trying woman who stumbles into his nightclub looking for help. Inexplicably drawn to Poppy’s big brown eyes and luscious smile, Jax reluctantly agrees to assist her. Little does he know his entire world is about to turn on its axis… In more ways than one.
Penelope “Poppy” Campbell is the sole witness to a vicious murder. The only problem is no one believes her. Desperate to prove she isn’t crazy, she turns to Jax Monroe—the sexy, intimidating, tattooed P.I. who also happens to own the hottest nightclub in Denver. The frustrating man makes her blood boil and her toes curl, but when danger closes in on them, Poppy has no choice but to trust Jax with her life.
Hidden away from the men hunting them down, these two are unable to escape the unbridled passion brewing between them. Before long, Jax and Poppy realize their lives aren’t the only things they stand to lose. And when danger finds them in the one place they should’ve been safe, Jax will stop at nothing to protect her. Because like it or not, Poppy is his.

His to protect. His to cherish. His…everything.