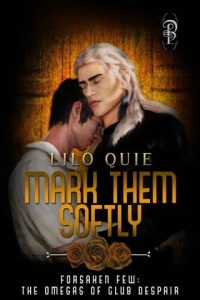 Mark has loved Yriel since the moment they met. Not a single heat has passed without sharing a bed with him, but mates they’ll never be. Yriel fears harm coming to Mark, and the judgment passed on omegas like him, omegas who refuse to submit for their alphas.

It’s been forty years since Heofan of Grey and their child left this world, and Shaw hasn’t found himself a mate, nor is he looking for one. He’s tired of looking for the one, but maybe there isn’t a male meant for him. Maybe there are two? The fates have blessed his living son’s home and brought peace to Aurelius and the grims. When a whisper catches Shaw’s ear, he can’t ignore the fates or his wolf. His mate is close.

Yriel Nicodemus has lived a long life jealously guarding secrets that would undo the very nature of vampiric society if revealed. All the peace he’s worked to achieve, the lives he’s saved, all would be undone if anyone were to find out. When the worst comes to pass, everyone will know what Yriel did, but with his mates and family at his back, the future looks clear.