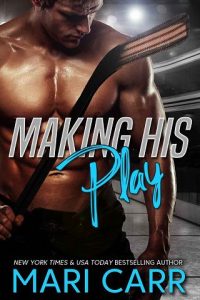 Alex has a big name in hockey, famous for his stick skills—on and off the ice. But he’s also got a freckle-faced female problem. He took his sister’s tomboy best friend, Charley, to a Vegas wedding to cheer her up after a bad breakup.

Too much champagne later and he’s waking up with Charley in his bed and his ring on her finger. And the crazy part is…

Mrs. Alex Stone has a nice ring to it. Even though Charley knows the name’s not sticking. Her best friend, Bella, only set her up with Alex to make her ex jealous. Karma, she called it. Too many drinks and a lot of laughs later, Alex suggests they elope as a lark. Charley’s all in. It is Vegas, after all.

Charley calls timeout after the not-so-fake honeymoon, but Alex says they’re going into overtime.
Game on!