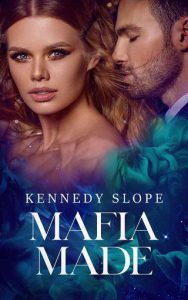 Ezra Wright is New York’s most eligible bachelor. Thrust into the spotlight after his attempts to bring down the Blanchi family, he’s hoping to leverage his newfound fame into building a political dynasty. He’s determined to bring down the mafia in New York, and if he can’t do that as D.A., he will get it done as mayor.
Annie is on the run from the Bratva. Now that her father has become Pakhan, she’s determined to stay as far away from the family as possible. After all, being with the Bratva had left her broken and bleeding. But Annie isn’t sure how long she can hide, even in a city as big as New York, and when she becomes Ezra Wright’s secretary, she finds her life starting to unravel.
Ezra finds himself intrigued with Annie. There’s something about her that he can’t ignore, and when he needs to fix his image, he convinces her to go along for the ride. Though Annie is skeptical, she finds herself drawn to the handsome D.A. who might ruin her if she lets him too close. After all, Annie’s family stands for everything that Ezra is fighting against.
When the stakes get high, will Ezra and Annie build a dynasty or a house of cards?

Mafia Made is the third book in the Crowned Criminals series. While it is not necessary to read, Mafia Princess first, situations and characters will be referenced in this story. Please note that this is a dark romance not suitable for those under eighteen.