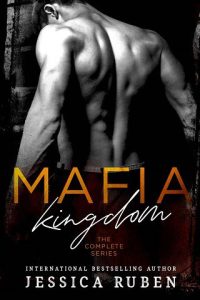 Get ready to binge this bestselling series of scorching hot stand-alone novels in a gorgeous box set, featuring Light My Fire, Love Her Madly and Break On Through.

Light My Fire
He saved me from war.Fed me when I was in too much pain to eat.
Smuggled me and my family into America when it became too dangerous to stay.
But, Nico didn’t flee with us.While I began elementary school in the United States, he was building the greatest and toughest Mafia of the century.
The Mafia Shqiptare.
Nico is now King of all underground trades.
Sexy. Aggressive. Brilliant.
After years of nothing but silence, he’s back in my life,
Ready to do whatever it takes to bring me into his universe.
He isn’t leaving until he takes me with him.

Love Her Madly
Darius is a man with power and control.
As a child in the Mumbai slums, living among lethal street gangs, all he cared about was his safety and where he would find his next meal.
That is, until the Madam of the most famed brothel in India finds him, offering him a life he can’t refuse.
As an intelligent, beautiful woman raised in a small mountain village, Gini never would have imagined a place like The Mansion exists.
Stolen by Darius into a dark underworld where the famed Mullah Omar arranges pleasure marriages to the highest bidder, Gini fights for survival.
At first frightened by the dangerous man who keeps her prisoner, Darius slowly becomes the one light in her dark world.
The Madam. The Mullah. The Protector. The Beauty.
Who will win when money reigns supreme and power is everything?

Break On Through
Talia
My only goal in life is to play the cello in a world-famous orchestra. Unfortunately, education, lessons, and connections don’t come cheap.
So, when the most notorious Mafia boss in New York City offers me millions to marry one of his men, I have two choices: take the money and follow my dreams, or risk death.
I choose to take the money.
But if I had known who my husband would be, I would have picked death.
Leo might be gorgeous and lethal, but he has never met a woman who refuses to bow.

Leo
After being pushed out of my country, I lost my woman, my business, and my life.
The streets of New York City are dangerous but nothing compared to the wrath growing within me.
Joining the Mafia is a natural progression, especially when they help quench my thirst for revenge.
When the boss offers me a marriage that will help me reach vengeance, I jump at the chance.
I figure she’ll be a sweet, quiet girl …
Not the stuck-up musician from the club.
She thinks she can always get the last word, but I’m on a warpath that she can’t derail.
She can either fall in line or fall into pieces.