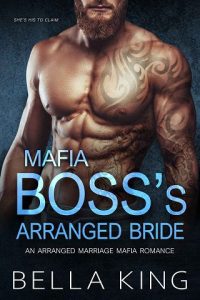 It began with a massacre.

As shots rang out, Nikolai stole me from my wedding,
Claiming me as his own before anyone else could get the chance,
Bending me into a pale memory of who I used to be.

Nikolai is cunning, drop-dead gorgeous, and feared by everyone who knows him.
Including me.

Now he demands that I marry him instead of the man I was sworn to…
His brother.

He wants me to make a mistake, to get lost beneath his wicked tongue,
To fall into the dark side and finally become his,
And without anyone to save me, I slip…

In doing so, I become an enemy to my own family,
A death sentence to all who know me.
Except for Nikolai – the killer, the boss, the man with no remorse,
And soon to be my husband.

I belong to him now,
And he will crush anyone who says otherwise.